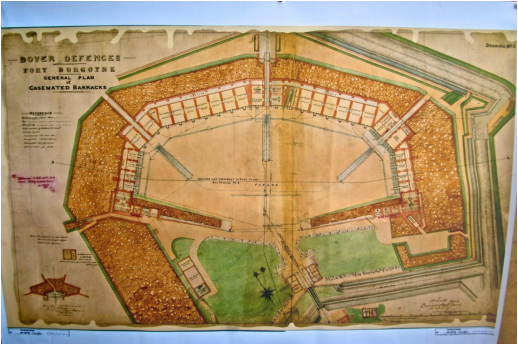 Went and had a look around during the Dover Tattoo. The Western Height Preservation Society had been asked to arrange guided tours during the event. Unfortunately due to the health and safety pansies they were unable to allow people into the underground sections, so this will have to wait.

Fort Burgoyne, originally known as Castle Hill Fort, was built in the 1860s as one of the Palmerston forts around Dover in southeast England. It was built to a polygonal system with detached eastern and western redoubts, to guard the high ground northeast of the strategic port of Dover, just north of Dover Castle. The fort is named after the 19th century General John Fox Burgoyne, Inspector-General of Fortifications and son of the John Burgoyne who fought in the American Revolutionary War.

Until recently the central part of the fort was still used by the Army as Connaught Barracks, and the site is now being redeveloped for housing. Plans to use the barracks as an open prison were dropped in November 2006. The eastern and western outworks are accessible but heavily overgrown.