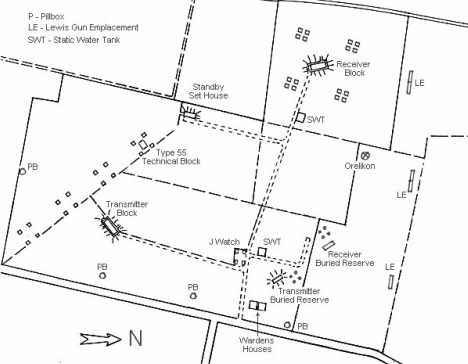 Pics of my visit to RAF Dunkirk, a trip that I dragged the wife and kids too, much to their delight.

Some of the site is still used by a farmer and one of the transmitter blocks is locked up. There are underground bunkers on site (found a few hatches) but these are flooded due to the water table.

One mast remains from the originals, as I understand it the site is up for sale, with income from the mast, due to mobile phone transmitters.

The pics aint that great but give you an idea of the place. I find it amazing that these buildings are built to withstand bombs, but plants and weather can bust them apart.
Following the development of radar at Orfordness and at the Bawdsey Research Station in Suffolk during the mid 1930's, the Air Ministry established a programme of building radar stations around the British coast to provide warning of air attack on Great Britain. A survey was undertaken to assess the suitability of the local terrain for Air Defence Radar operations with the first of these new stations coming on line by the end of 1937. This network formed the basis of a chain of radar stations called Chain Home (CH).These original five East Coast stations (later extended to 20) were augmented by a new design of 'West Coast' stations. The East Coast stations were similar in design to the experimental station set up at Bawdsey in 1936. In their final form these stations were designed to have equipment housed in protected buildings with transmitter aerials suspended from 350' steel towers and receiver aerials mounted on 240' timber towerks.
More info at Sub Brit - http://www.subbrit.org.uk/sb-sites/s...ch/index.shtml