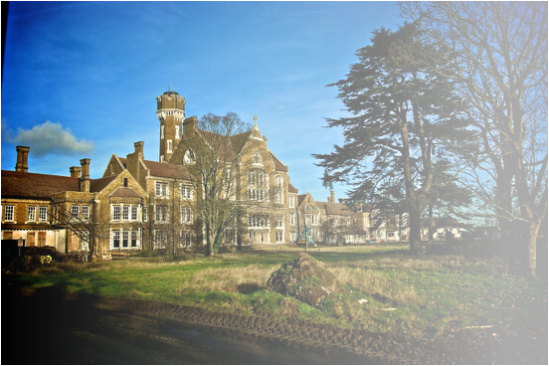 I had driven past this place many a time, sitting in my car staring at the amazing buildings, surrounded with 10ft palisade fencing, wondering how to get in there.

Today my luck was in, construction had started on the site, or should I say demolition, and someone had left the backdoor open. I went for the brazen approach, slung on my hard hat and hi-vis vest, and strolled in the back gate.

As I entered; I thought I had been rumbled as someone approached me, but he asked were the site office was as he had a fuel delivery to make, so I pointed him in the right direction.

The only entrance to the building I could see was the central hall, were there were contractors sandblasting, I braved up and walked through the room, gave an "alright mate", and was in.

I had a good wonder around the place, but I feel the most impressive thing about this hospital is the outside of the buildings, which are quite stunning. I did find the basement section, but had forgot my torch, still managed a good wonder around though with only the light of the viewer on my camera. Spotted a small tunnel of one of the chambers, but was not willing to go further without a torch.

Once I had had my fill of corridors and peeling paint I headed towards the way I came in, but this had been shut and locked. I had to now walk directly through the main site entrance and out through the front. Its strange how you feel the world knows what you doing, but really they have no clue, and most don't give a damn anyway.

I could see my car, a sped up my pace and stripped of my hat and vis, home and dry I thought. A police car pulled upside me, I thought I had been busted and got a hot flush. The window wound down and the officer asked if I was security for the site!. I nearly laughed in his face, but managed to hold it in.  "No" I replied, "I'm a builder going for my lunch" . With that we said our goodbyes and he left. Phew!
A Bit of Information-
Constructed following the Commissioners of Lunacy's insistence that the city of London provided its own asylum for pauper lunatics, who had previously been sent to Bethlem Asylum in Lambeth. The Commissioners discouraged the use of voluntary asylums for pauper patients and despite the low number of such patients in the City area, a site at Stone, near Dartford was purchased and the building erected for 220 patients. Declining numbers of pauper admissions led to excess space being used to take out of area cases and later private, fee paying patients (from 1892). The renumerative nature of this work allowed further additions around the turn of the century.

From 1924 the asylum was renamed the City of London Mental Hospital, then later became Stone House hospital on transferral to the National Health Service in 1948. Prior to transferral to NHS over half of the population of nearly 600, were private patients. Only 50 patients were actually from the City of London , with the remainder coming from other authorities. The hospital catchment area later took in local patients, from Dartford and Gravesend districts. In the late 1980's the grounds to the north east of the site alongside Bow Arrow Lane were developed as Learning disabilities villas to accelerate the closure of the nearby Darenth Park Hospital.

Site development:
The original asylum building comprised of the administration building to the north, with workshops, boiler house and main stores to the west, and laundry and sewing room to the east to the east. The south front was occupied by the recreation hall combined with chapel above, flanked by male and female ward blocks. Between the administration block and hall stands the prominent round water tower. The hospital cemetery was located on the north side of Bow Arrow Lane . Later additions included an isolation hospital (known as the cottage hospital) at the corner of Cotton and Bow Arrow Lanes, followed by a new detached chapel opposite the admin block consecrated in May 1901. Further additions consisted of enlarged laundry and workshop developments combined with a laundry workers block all on the west side of the main complex. Two single storey sick and infirm wards were also built at either end of the South frontage. A nurses accommodation block was added during 1909-10. Close to this, further staff accommodation was constructed around 1975.